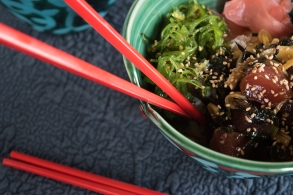 There are as many versions of the bowl of deliciousness as there are cooks in Hawai’i. And honestly, nothing beats enjoying a bowl of Poke on Waikiki Beach, unless of course,  you happen in to Ono Seafood on O’ahu.  Even so, I was able to find some of the more common additions to Poke and decided that, since it wasn’t likely I’d be able to get back to O’ahu in time for dinner, I’d give it a run here at home.

A suggestion: if you’re looking for a recipe, look for ones that originate with Hawai’ian chefs.  Here’s one I found from J. Kenji Lopez-Alt on Serious Eats.

Place wakame and hijiki in separate small bowls. Cover with boiling water and let rest until rehydrated and tender, about 5 minutes. Drain and press with paper towels. Roughly chop wakame. Add wakame and hijiki to a large bowl.

I garnished ours with seaweed salad (purchased at the sushi bar of Wegmans), ginger, sesame seeds and a bit of chopped macadamia nuts.

I taught second, third and fourth graders. Teaching was my passion and joy for 30 years. And it didn't hurt that they called me "mom" sometimes. END_OF_DOCUMENT_TOKEN_TO_BE_REPLACED
This entry was posted on Thursday, June 23rd, 2016 at 10:52 pm and tagged with Hawai'i, Poke bowl, raw fish, Serious Eats and posted in Entree. You can follow any responses to this entry through the RSS 2.0 feed.
« 18 September 2015 Crab Quesadillas
24 July 2016: Minty Bulgur Salad with Salmon & Cucumbers »