While I can make a decent vinaigrette and a passable tahini dressing, I haven’t strayed far from the standards as far as gussy-ing up salads.  This, it turns out, has been an error of omission.  We eat some form of salad nearly every night, so branching out to new tastes was long overdue.

This dressing comes from one of my new favorite cookbooks, Thug Kitchen.  And, as usual with the Thugs, it is simple, plant-based and is entertaining. It also is really quite tasty – who knew roasted carrots made such a great dressing?! 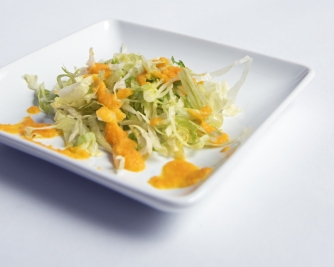 Last week I was reading a NY Times food article on the subject of vegetarian and vegan cooking (The Hippies Have Won). In the middle of the article, was a reference to a blog and cookbook series, Thug Kitchen. No kidding, this was one of the most fun cookbooks I ever browsed through and since all the recipes were plant-based, well… it was a win for me. If profanity is a hang-up, you might want to just follow the sanitized version below, but if you want some real kitchen coaching, buy the damn book, cook from it and learn to eat healthier.

Here’s the recipe for a strawberry version which was posted on Thug’s website. My version was based solely on what I had in the house to use up. I’m pretty sure the Thugs would be okay with that.

Now, go and buy the Official Cookbook and enjoy the ride and some great advice on plant-based.

I recently discovered a great resource for vegan and plant-based eating, The Glowing Fridge. Shannon, the author of this site, has lots of great ideas – including recipes – for anyone making the change to a plant-based diet.  One of the series of recipes Shannon has developed, the Glow Bowls, are variations on bowls of grains and veggies that can lead to endless variations.  After trying the Green Goddess Glow Bowl, I know I’m inspired to include more plant-based cooking in the coming year.

Since I usually have the Kripalu House Dressing (or variation thereof) on hand in my fridge, next time around I’ll probably use that in place of the dressing recipe* cited. This is just my personal preference for a bit of cayenne and chile powder.

posted by Plant-Based Cooking. Copyright 2011-2015 by Diane Smith and plantbasedcooking.com. All Rights Reserved.

You would have to be living in a vacuum to have missed out on the popularity of kale over the last several years. This stew from Diane Cook takes advantage of kale but also a spice melange from Morocco. Listed separately, the spice mixture makes the ingredient list seem large, so I’ve lumped these together. The rest of the ingredients went together very quickly making this stew a candidate for a busy week night.  This recipe serves 6; as we are a two-person household, I cut everything in half and still had plenty of leftovers.

Recipe created by The Purple Carrot.

Not too long ago, a good friend of ours made a more authentic paella for us and it was, of course, unbelievable.   I would venture to say that my Spanish eating and cooking friends would most definitely assert that this is NOT paella. Paella should have meat or seafood (or both!); however, for the plant-eaters among us, this veggie and brown rice version is delicious.

We received our second Purple Carrot order this week, and everything looks as fresh as the last time. Outside of cooking the quinoa and blanching the asparagus, there was no cooking involved. A traditional Bibimbap (meaning: mixed rice) involves warm rice topped with seasoned, sauteed vegetables and topped with a hot or salty sauce. In this version from Purple Carrot, the sauce is a wonderfully hot chile sauce.

created by The Purple Carrot

In our effort to be more plant-based and vegan with our eating, I’ve been doing a lot of web-searching. Fortunately, plant-based eating is a hot topic (see Forks over Knives) and there are many creative cooks offering recipes.  This one comes from the magazine, Real Simple and was a perfect fit for a busy night – total time from prep to table: 50 minutes.